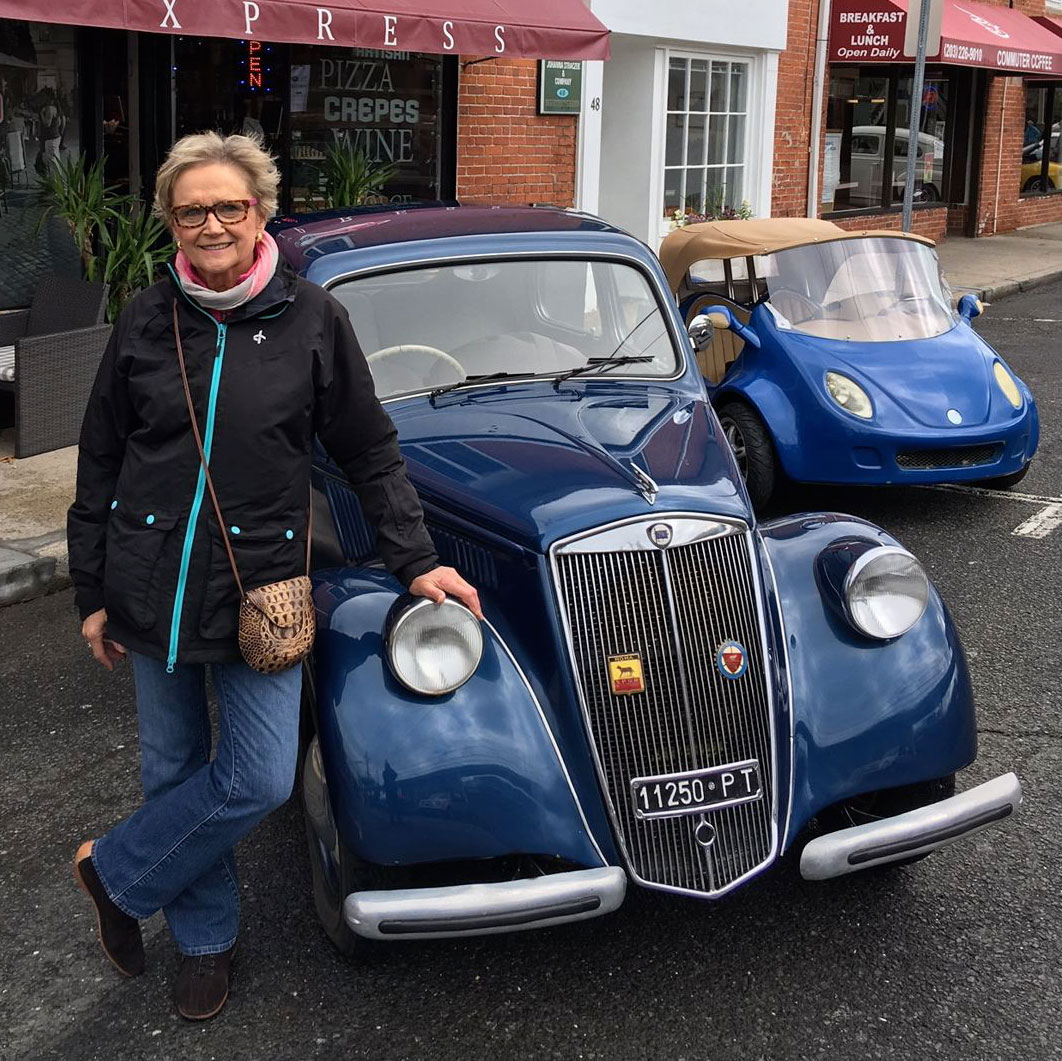 Author and script writer Brock Yates once described Judy Stropus as a “racing personality,” since her career in motorsports has covered a gamut of disciplines – including her unique ability to accurately time and score endurance sports-car races before the introduction of computers – driving race cars, and becoming an author and an award-winning public relations expert.

Probably best known as a professional timer/scorer, Judy has worked with top teams such as Penske Racing in Can-Am, Trans-Am and at the Indy 500, Bud Moore Racing, BMW, American Motors, Al Holbert’s Porsche IndyCar team, the Porsche teams of Ted Field, Bruce Leven, Bob Akin, Dick Barbour, Wayne Baker, Chevrolet factory teams and many more. She is “famous” for having the ability to score 24-hour races without taking a break.

At the same time she handled p.r. duties for Chevrolet, Bob Akin Racing, Brumos Racing, among others. She also expanded that expertise to include working with TV networks such as CBS, TNN, ABC and ESPN. After she retired from timing, she grew the public relations side of her business, JVS Enterprises, continuing to work with Chevrolet, and adding such clients as BMW North America, Duracell, Pirelli, Mattel, Callaway Competition, Dunlop, General Racing (Sonoma Historics) and Don Schumacher Racing in the NHRA Drag Racing Series. She continues to work on special motorsports projects, including p.r. and consulting duties for the Road Racing Drivers Club, Greenwich (Conn.) Concours, New England Auto Museum, Lime Rock Park, the International Motor Racing Research Center, Rolex Bob Snodgrass Award of Excellence, Arnold Entertainment Partners, Evro Publishing, among others.

She was awarded the 2008 Jim Chapman Award for Excellence in Public Relations by the American Auto Racing Writers and Broadcasters Association.

In 2016 she received the RRDC Bob Akin award given to a driver who has a passion for motorsports and automobiles, a high level of sportsmanship and fair play, and who has contributed to the sport of motor racing and the community at large.

She is a member of AARWBA, the Road Racing Drivers Club, the Madison Avenue Sports Car Driving and Chowder Society, and the Public Relations Society of America.

Other awards include the 1990 Appreciation Award from the SCCA for her work for Chevrolet in the SCCA Trans-Am Series, and the 2014 Tom Butler Award, given to the driver “who best exhibits the competitive spirit, sportsmanship and fund-raising goals” of the annual Jacksonville (Fla.) Go-Kart Grand Prix benefiting Spina Bifida.

In 2017 she was nominated in the sports car racing category for the Motor Sports Hall of Fame of America (Scott Pruett won it).

Most recently, in 2018, she received the Jane Dusek Award from the Simeone Foundation Automotive Museum in Philadelphia.

Her race-driving career includes SCCA National competition, earning a place in the National Runoffs in 1979, the Volkswagen Cup, Showroom Stock endurance races, the Kelly-American Challenge, and numerous vintage racing events, including piloting a 1954 OSCA Maserati in VSCCA competition before she earned her national SCCA license. She has raced a Porsche 914, 924, Maserati Bi-Turbo, Fraser-Nash, among others, and currently competes occasionally in go-kart racing. She also competed in the notorious Cannonball Baker Sea-to-Shining-Sea Memorial Trophy Dash in 1972, with actress Adrienne Barbeau playing a character loosely based on her in the movie, “Cannonball Run.”

She has served as a Concours judge at the Palm Springs (Calif.) Concours, the Greenwich and Fairfield Concours in Connecticut, and the Amelia Island (Fla.) Concours. She competed in the 2013 California Mille in her 1952 Lancia Ardea, and helps organize the Café Racers luncheons for car collectors in Connecticut.

Born in Kaunas, Lithuania, Judy learned to speak English after arriving in the U.S. “many years ago.” She lives in Ridgefield, Conn., is the author of “The Stropus Guide to Auto Racing Timing and Scoring,” and the editor of a number of racing books, including two annual editions of “Auto Racing USA.” In 2018, she contributed to and coordinated publication of “Lime Rock Park: Six Decades of Speed, Beauty and Tradition.”